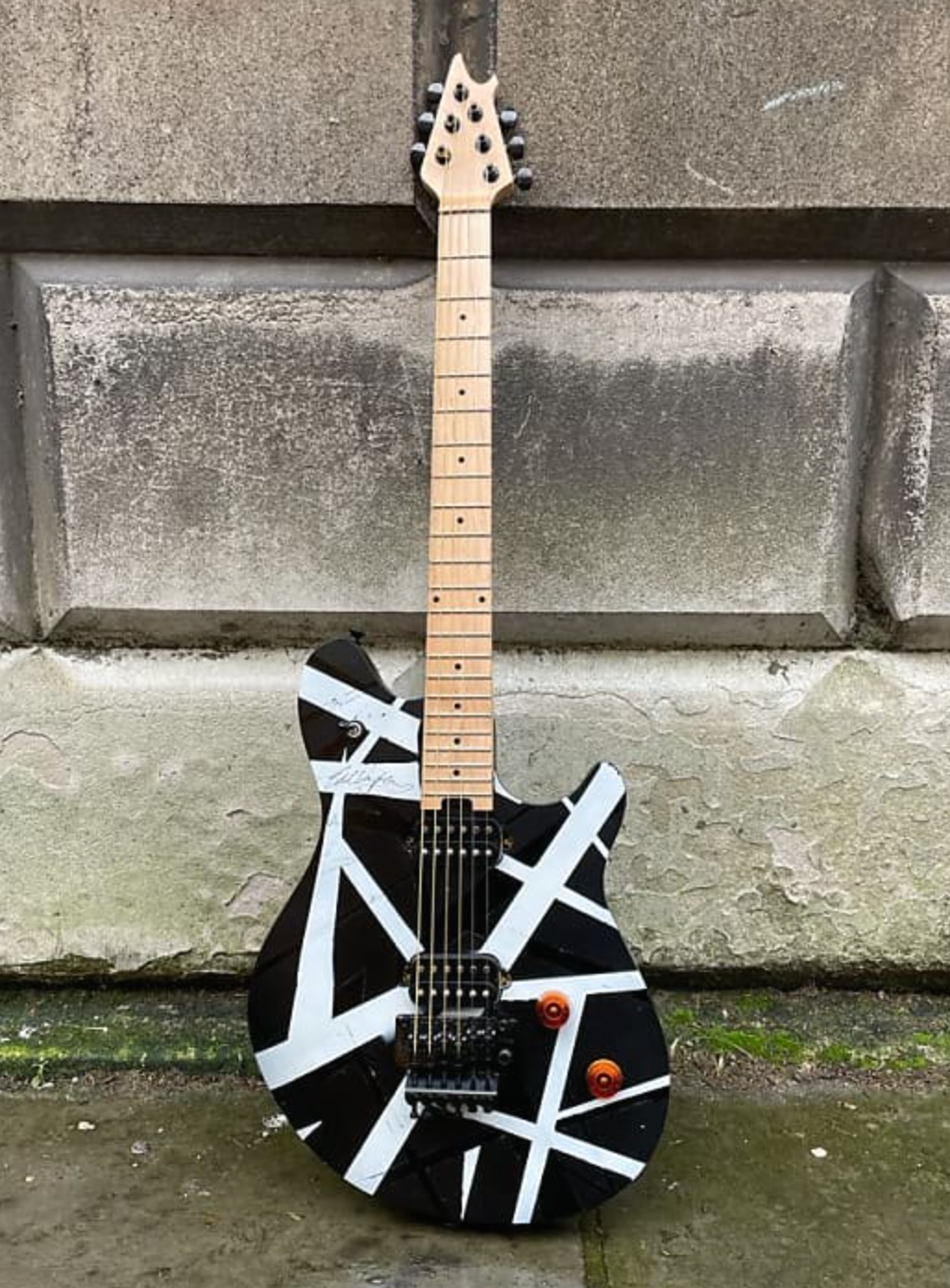 The following instrument was owned and used by one of the worlds most respected and iconic guitarists, the late Edward Van Halen. The instrument offered is one of the most important Van Halen guitars to be made available for public sale as it was personally hand painted and customised by Edward Van Halen with his legendary Frankenstein Stripe Finish.
Login or Join To Message Seller

About This Vintage Ad

*** ALL EU PURCHASES ARE DELIVERED WITH TAXES AND DUTIES PAID ***

The following instrument was owned and used by one of the worlds most respected and iconic guitarists, the late Edward Van Halen. The instrument offered is one of the most important Van Halen guitars to be made available for public sale as it was personally hand painted and customised by Edward Van Halen with his legendary Frankenstein Stripe Finish. Please see full details as follows:

The above instrument was one of Several “ Prototype EVH “ instruments that was produced by EVH prior to the release of the Standard Production Wolfgang Special , these pre production prototypes differed greatly from the production models and included the very distinct unpainted , unbranded natural Finished Headstock Face

“But perhaps most interesting of all, Tolinski explained how it was probably not just a happy accident concerning how Eddie came up with the seminal design on his Frankenstrat. The first possible inspiration stretches back to where the Van Halen brothers original hail from. “How he actually came up with the actual idea…I have a few ideas about it. One is – which is interesting to me, and if it’s true then it was a subconscious kind of thing – there is a movement of art and design called De Stijl, that actually started in Holland in the Netherlands.”

“And there were artists like [Piet] Mondrian who became hugely celebrated. And De Stijl is basically these paintings that were created by using primary colors at hard angles. Some of the art was just red squares on white backgrounds or black stripes. But if you go look at these De Stijl paintings, you’ll immediately get the vibe of Ed’s guitar. So, to me, that was sort of a fascinating thing. Because Ed lived in Holland until he was seven or eight, there was no way he didn’t see that as part of the Dutch culture – this painting and this art. So, I think some of the inspiration and aesthetic of that guitar just comes from that.”

The instrument has been personally signed on face by Edward Van Halen and comes with his own  personified verification that confirms, quote

Although other Personally owned and used EVH instruments have been sold within recent years we feel based on the fact that the instrument was personally customised and Finished by Edward Van Halen in his Legendary Frankenstein Stripe Finish this is undoubtedly one of his most personal and important instruments to have been released for public sale and its appeal will be both memorabilia and art based , ie the guitar carries EVH’s unique personally hand painted finish.

WHY BUY FROM US? We are one of the world’s leading specialists in used and vintage gear with over 30 years of experience. Prior to shipping each item will be fully tested and checked so it arrives ready to use and enjoy. If you have any questions we are happy to assist 24/7.

If you are looking to Sell, Trade, Part Exchange or consign any instrument then please contact us through the Denmark Street Online Website and we will come back to you ASAP